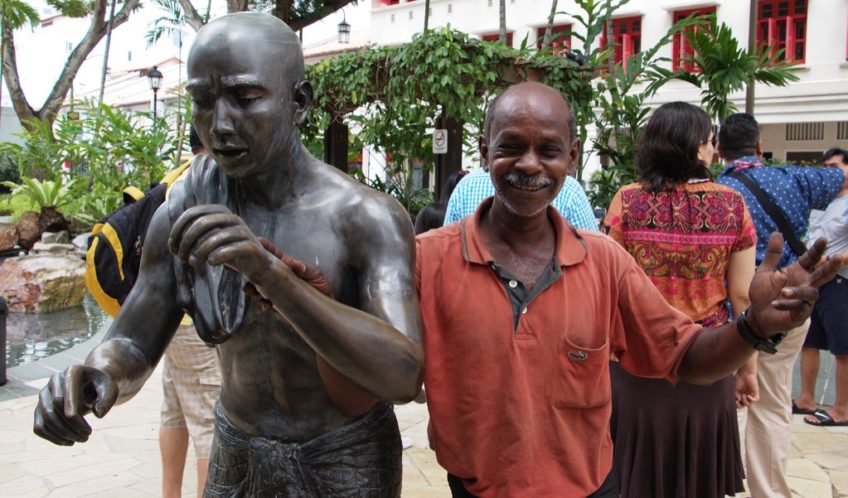 Simple unexpected encounters with strangers can bring forth blessed experiences when we are open and allow it to transform our day.

On a sunny Friday morning, I accompanied my wife on a sketch walk exploring the cultural “Da Po” in Singapore’s China Town area.  With my camera, I recorded small things that intrigued me.

We were passing by the Telok Ayer Green park and amongst the things that we saw first were the human size statues.  While my wife was busy exploring the park and sketching, I took a closer look at the statues when I saw a man nearby.

As I was doing a close-up film recording of the statues, I could not help but notice the man nearby.  He seemed to be in deep reflection with the statues.  I did not want to disturb him.  The man was wearing a simple loose red shirt with a worn out dark pants.  He had short white hair that came together with his nicely grown short white facial beard.  His face looked weary and tired and as I looked closer, I glance upon his dark eyes.  The eyes was intense and deep.  I could feel the weight of his eyes that pressed my soul.

Then he looked right at me.

“The statue just looks like me.”, he said with amazement.  I did not realize it at all.  With him and the statue beside each other, I came to the conclusion that this man was absolutely right.  I nodded back in turn.  We exchanged pleasantries and began talking.  He was amazed with the statue because it brought back memories of old Singapore.  He was of Indian descent and his papa and granddaddy, as he called them, were merchants on this land long before Singapore was born.  He jokingly said Singapore and him are almost of the same age.  Singapore celebrated its 50th year as a nation in 2015.  He was just two years younger than Singapore and about to celebrate his birthday in April 8.  He lived the transformation of Singapore from a rural patch of land to a bustling city.  “Lee Kuan Yew was a very strong man.”, Nedun proudly mentioned.

Though life may be a struggle for Nedun, he stated he is happy and content in having his own family and most of all that his life has been saved by Jesus Christ.  That there is nothing more important than Him.  “I am a Christian.”, he replied when I curiously ask him his faith.  I took a photo of him with the statue and wanted to send him the photo but he did not have any email.  I signalled my wife from afar to come over and do a sketch of him instead.  While my wife was sketching him, Nedun continued on we must remain strong in His name that we should not give up despite the circumstances we are in.  Our challenges can be overcome through Him.

My wife tore the page from her sketchbook and gave him the sketch.  As the blazing sun hangs above us, he bid farewell to us as he still has work at night and needed to get some rest.  We thank him for sharing this moment.  I shook his firm and dry hands.  We bid farewell.

My wife quoted a Bible verse with the sketch.

“Whom have I in heaven but you? And there is nothing on earth that I desire besides you. My flesh and my heart may fail, but God is the strength of my heart and my portion forever.”Psalm 73:25-26

To Nedun, may God continue to guide your life and may you continue to be a blessing to others. 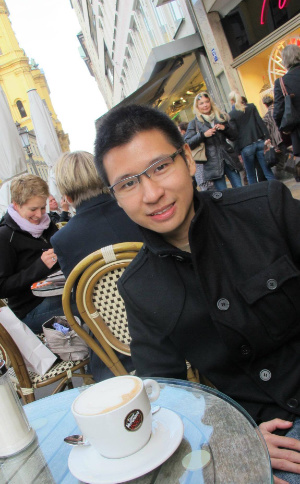 Welcome to Breathe Pixels. My name is Jonats and I explore the communities around me wherever I may be. I believe food brings people closer and makes us appreciate life in this world better. 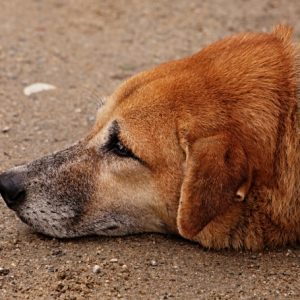 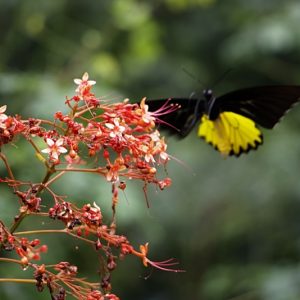 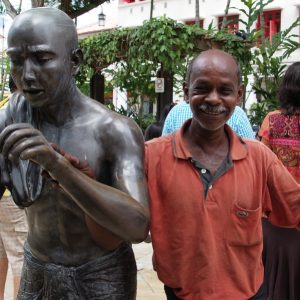 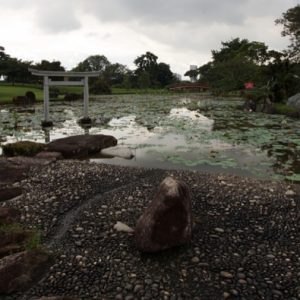 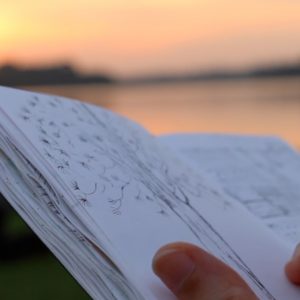 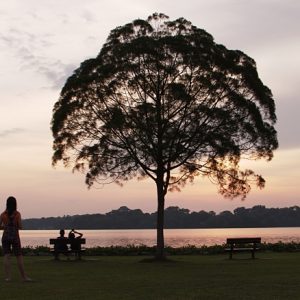 Let us celebrate life and see the world never before through travel.
Subscribe for free updates.